Breathing properly harmonises the entire nervous system and balances the workings of the brain.

Could there be a more compelling reason for paying heed to how we breathe and developing a way which is healthiest and best for us? Our lifestyle and low level of physical activity have given rise to unfavourable changes in our breathing habits. Yet breathing is crucial and one of the functions upon which the work of all the other vital functions depend. From the medical point of view, what is most vital to the body is the efficient functioning of all its systems. It must be strongly emphasised that the driving force here consists of the cardiovascular and respiratory systems. 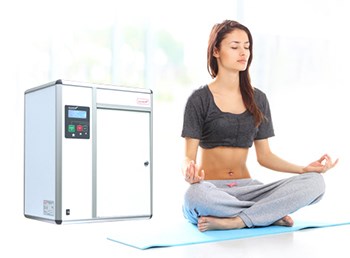 The yogis of ancient times developed breathing techniques based on what they observed in infants. Over the ages, those who followed them developed countless breathing exercises. Breathing correctly is an integral part of yoga and conscious breathing is a vital part of every yoga position.
Yogic breathing is always performed through the nose and there are no pauses between inhaling and exhaling. It can stand alone as a separate exercise and is also used in relaxation techniques. It requires little practice for the breathing performed while practicing yoga to become one’s normal method of breathing.

As a result of regulated breathing, we attain spiritual peace. When we have control over our breathing, our cardiac performance is enhanced; spasmodic breathing causes the heart to function irregularly. Our performance at work will also be improved if, before beginning any task whatsoever, we first regulate our breathing. It calms body and mind alike.
How can halotherapy help with yoga?

Performing asana in a space equipped with a SALSANO DC-405 halogenerator transports us into an environment rich in salt aerosol. It simulates the atmosphere found in a salt mine, by the sea or near a saline graduation tower.

With its selection of themed programmes, the SALSANO DC-405 means that the benefits of yoga can be enjoyed in any indoor space, small, medium or large.

Breathing deeply during a yoga session accompanied by halotherapy provides us with the maximum benefit. The breathing increases our lung ventilation and this, in turn, allows the health-giving aerosol to reach the deeper-lying parts of the respiratory system.